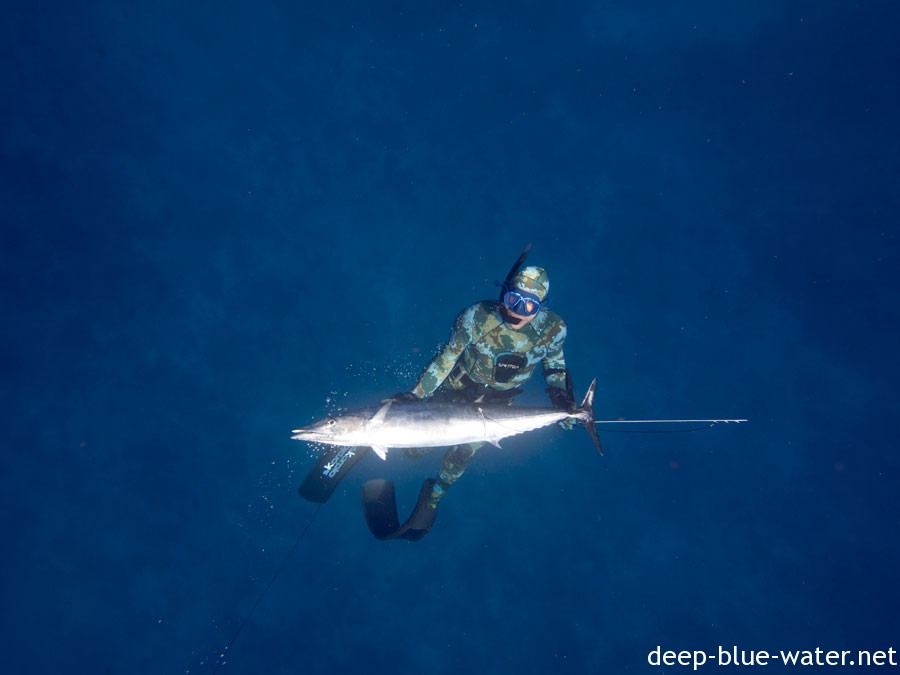 Well taking advantage of this calm weather, got out yesterday with JP, Julian, and Mike. We headed west and spent the whole day trying for wahoo.

The water had some tiny particulate in it but I could see a color change on the bottom where the reef ended in around 100 –110 fsw.

We did a lot of drifts not see much except triggerfish and file fish. File fish are especially interested in the flashers.  Then I had  school of wahoo swim in behind me while I was looking the other way. Both me and JP blew our shots. His mako somehow got the safety engaged and I just straight missed. I can’t believe it I can shoot a 2# cero mackerel from 10 feet away with great success but put a 50# fish in front of me and I miss.

Then I was driving the boat and of course the big school came in. First I saw Mike’s hippo float taking off like a boat was pulling it. When I got up to Julian to pick him up to chase it, he motioned that he was tracking something. So I went and picked up JP. Then I heard Julian yelling and he was being pulled by his float off in the distance.

I dropped JP off with Mike and then went to give Julian a kill gun. He put a second shot into his fish and it was in the boat. Then I picked up JP and Mike, second fish in the boat.

Then  we drifted forever without seeing anything. I went to dive on a big dog snapper put ran out of float line, this dog had to be 15# or more. I just could not seem to win this day. Then shortly after Mike shot another wahoo. We chased it with the boat and I jumped in and put another kill shot in it.

Then after all the exertion I grabbed a jug of water and drank a bunch really fast. What I didn’t realize is that Julian had put shampoo in this water bottle to use when putting on his wet suit. so I spit it out and grabbed another water bottle. Which apparently he had put shampoo in as well, from diving last week. It was pretty awesome. So in addition to missing my fish I drank soap twice as well.

Nice wahoo. The vis looks awesome! Sucks about the shampoo water though.

Man what an awesome day. Just like to thank Ben for putting me on my first and second Wahoo.

These deeper rigs don't seem to hold as much fish

Went to Mexico for a couple weeks, turned into thr

Diving the rigs in Louisiana with @ronniejc94 @rub

Time is running out, enjoy the it while you can l

I am even sure I really like tuna spearfishing. #

Chris with one of the tunas #spearfishing #pesacas

Diving in Florida I have swum with hundreds (thous