Went lobstering on Thursday night and spearfishing on Friday. On Thursday it was flat calm and beautiful but my boat was being serviced so I worked all morning.  In the afternoon I got my boat back and we were able to go out around 3pm. It was flat calm and perfect out, but since we got such a late start we just did some inshore lobstering. We caught 7 lobsters and Albie caught 2 spider crabs. 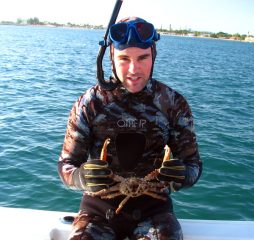 Since it was such nice weather we decided to go out spearfishing the next day, so I gassed up the boat etc. Noaa had originally called for 10 knot winds, by the evening they changed their forecast to 10-15, in the morning they said near 15 knots and the weather buoy was saying 20 knots from the northeast. So we went out anyway. Albie, Gabby, Brian from Marathon all went with me.

So I scrapped plans to run far west and just headed out to see if it was doable or not. It was rough but spearable. At first the blue water was only on the bar but as the day went by it moved onto the reef. Visibility ranged from 30 to 70 feet. There was a ripping current in the deep water going to the east, that with the northeast wind created not the most comfortable seas. We did some deeper drifts without seeing much and then came in to the reef. 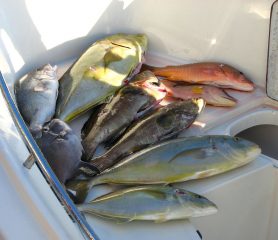 We shot a variety of fish, triggerfish, yellow jack, dog snapper, black grouper , hog fish and margate. I shot possibly my best yellow jack, I should have weighed it but I think it was probably over 20#. The biggest I have shot was 20# with the guts still in it. The jack actually broke my shooting line and was swimming around in circles with a whole school of similar sized yellow jacks following him, with my shaft still in him. Luckily Brian was able to get a shot on him and I was able to recover my shaft.

I guess I should change my shooting line more frequently. Not sure if I should try lighter line because the wear and tear seems to come from the line being very snug in the hole where it connects to the shaft.