From the Blue water to the Patch reefs 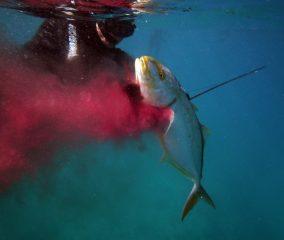 Went out yesterday with Catherine, Luis, and Andy, and had the best day we have had in a while. We tried to go out early this week but got frozen out, and had to come in. This time we headed back out with more winter clothing and a new wetsuit top for me. It was still cold but it was calm and sunny, and that made all the difference.

First spot we hit we looked for wahoo.  The water wasn’t that clear so I didn’t have high hopes on seeing any. We drifted for a couple of hours, and I shot a schoolie dolphin and we saw some sharks. We decided to hit the reef and run east to see if the water was  clearer.   First drift on the reef I picked up a black and we also got some hogfish and a mutton snapper.   I know the grouper ban is in effect for federal waters but you can still take groupers in state waters until the 20th. The next spot we went to check was a cave that holds groupers like 75% of the time but before we got to it we ran into a school of yellow jacks.  I shot a 15# one.  After I gutted the jack,  I see what looks like a small shark swimming right at me. I waited wondering what its deal was, and then I realized it was a cobia.  I dove down and shot it with one band from about 3 inches away, and it went nuts. Andy had to come and put another shot in it to keep it from ripping itself off the spear. First Cobia on a spear for me, he weighted 22# gutted. 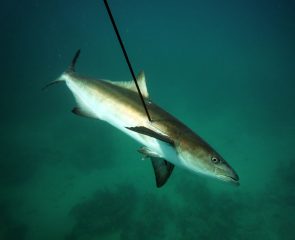 We headed to humps to see if we could pick up some more grouper. They were covered with fish but there was a ripping current and cold milky water. I saw a nice black grouper and Andy saw a nice cubera but neither of us got either fish. We headed out to the bar next but the water was milky enough to make it hard to spot fish from the surface, so we headed in shallower.

On the reef line, Luis and I ran into a school of cero mackerel and took a few for the smoker, they were all over. You could probably throw a block of chum in at that spot and fill the boat with mackerel, if you wanted to.   It was getting late so we decided to check some patch reefs on the way home.   We jumped in on one reef in about 15-20 feet of water and in about 20 minutes, Luis had shot two grouper and I shot a 6# & 11# mutton. I bent my shaft at some point and missed two stupid easy shots on two other grouper. I changed out my shaft, and followed around another grouper for a minute. There was pretty much unlimited keys sized hogfish, but we didn’t bother with them. It was getting late, and as much as it would have been fun to keep hitting patch reefs, we had a ton of fish so we headed in.

BAD ASS!!! Definitely one of the best days in a while. The boat looks like the day we hit the Marquesas. Enjoy the cobe…they are GREAT!