Floats lines are great, don’t let anyone tell you different. I learned about float lines by reading about them on spearboard. No one I met in real life used a float line, so it I had to learn about it on my own.

To offset this you can use a reel or a float line. I haven’t used a reel so I can’t really comment on them that much, except that they look cool and it’s probably a lot nicer than swimming around with 80 feet of rope and float pulling behind you. Yes it does it seemed kind of crazy to me to tie a whole bunch of rope to my spear gun and then swim around with the rope and a float dragging behind me. But it does work and it’s pretty standard for many of the better spearos to use some sort of float line set up.

Both the Reel and the float line allow you to control bigger fish without losing your gun, and both will allow you to give more play to fish that might rip off if you put full pressure on them. In most cases whenever I shoot a mackerel I let go of my gun and let it swim, I hold the float line in my hand and let it slide through my fingers as necessary as the fish runs.

A plus for the float line is that other people can see right where you are. This is very helpful when its is choppy because it easy to lose track of diver in these conditions.

Being one of the cheapest people on earth, when I reached the point where I knew I needed either a float or a reel, I went with float line. Reels cost a few bucks and I was able to make a ghetto float line for like $20. My first float line was a bunch of poly rope and a used boat bumper. Although it worked for my purposes initially I quickly upgraded. 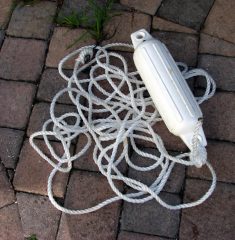 The poly rope works ok, but I found I prefer the float line Florida Free divers sells. The boat bumper compresses as it gets pulled underwater, once I saw a jack, not even a big one like 15#, pull the bumper under water and start swimming away with an expensive spear gun in tow, I knew the boat bumper had to go.

So now I am using spongex buoys floats, I got them at Cudjoe Sales, a commercial fishing store. They will ship stuff if you want to buy a set of these floats, they are around $8-$12 each. Here is there website http://www.cudjoesales.com/. These won’t compress and seem to be perfect for not huge fish, which is mostly what I shoot.

There are a bunch of manufacturers that make way more tech and way more buoyant float systems, of course they cost a lot more.

Last time I was out , I saw some large pelagic fish and I have been kind of thinking that getting a more substantial float might be a good idea. I know it would be overkill 99% of the time but that 1% is what will count.

They are used for making nets, and they sell them for cheap like $30-$40 for 300 feet. Thats like $10 a float line. I think they would be totally effective unless you are shooting something like large tuna.

I actually ordered 300′ of polyfoam line  from this website http://www.wallacecordage.com/polyfoam_floatline.htm it was shipped quickly and with shipping it was a little over $30. I comes in black only though. It shipped really fast and looks good but I haven’t tested it in the water so I guess we will see.