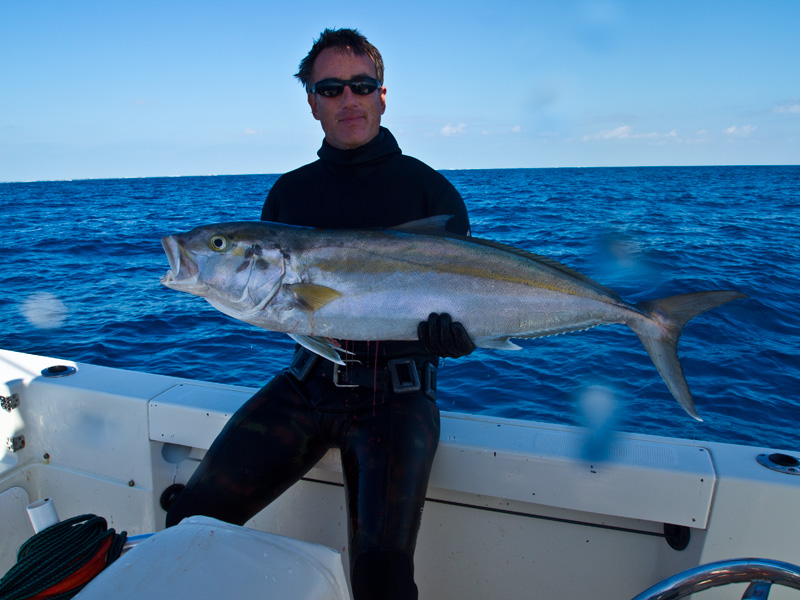 Went out yesterday with Lou, Juan, and Rafi.  Conditions were excellent, vis was 50 plus most of the day and the trash talk in Spanish was very plentiful. It was another day where I really wish Catherine had been there for photos.  We started by doing some drifts on the reef line, on one of the first drifts we came up on a rock covered in bait with a school of yellow jacks just going nuts around mid water column. On the top of the water two huge sailfish were working the bait. The sailfish swam right up to me and popped up their sails to corral the bait some more. I called to the boat for the camera but by the time it got there the sailfish were gone. Awesome sight, the Yellow jacks working with the sails to get the bait fish.  We popped a couple of the yellow jacks and moved on.

We checked one of the wrecks that had some big fish on it the other day. There were some fish, but not many really. The water was warmer, 72 degrees up from the 68 degrees and there were some fish but nothing major. I cut up a cero mackerel and had a school of amberjack surround me eating the pieces.  I shot one and Lou shot one, one to smoke and the other to use as chum. I followed a little black down onto the sand by the wreck but ran out of breath before I could get him. Lou strapped on a tank and went down and shot him. Since the bubbles from the scuba tanks seem to drive a lot of the fish away I grabbed the camera and took a couple photos.

After that we went back to the reef line. I jumped in on an area that was loaded with little fish. I didn’t see anything big but then Juan and Rafi dropped a bunch of amberjack chunks up current from me and everything started to go nuts. First fish I saw was a 3-4# mangrove which I shot and put on my float line. Then after 10 minutes, a nice black came in on the chunks.  I got down to within range but at the last second the fish started to to take off. I shot him anyway and let go of the gun for fear of him tearing the shaft out.  He ran around a hundred feet and then rocked up. Almost immediately there was a nurse shark trying to go in the hole.  I called for the boat and for Lou to get in with the tank before the nurse ate my fish. The rock wasn’t that deep, around 50 feet , with some work I probably would have gotten the fish out. But with the shark, better to just get the fish. As Lou was getting in, the nurse suddenly changed targets and grabbed the mangrove on my float line and would not let go. For like 5 minutes I had the tug of war with the shark, my gun lodged in a hole attached to a grouper and the nurse attached to my float line rolling around and going nuts. Finally the nurse let go after Lou poked him repeatedly and Lou was able to recover the grouper.

Then we went in to some live bottom to look for some reds and muttons. The water suddenly silted up and the temperature dropped but we did not really find that many fish. It was getting late at this point and we called it a day.  I brought the camera out even though it didn’t spend much time in the water. I am going to try to bring it more.

Nice grouper. What wreck is that?

These deeper rigs don't seem to hold as much fish

Went to Mexico for a couple weeks, turned into thr

Diving the rigs in Louisiana with @ronniejc94 @rub

Time is running out, enjoy the it while you can l

I am even sure I really like tuna spearfishing. #

Chris with one of the tunas #spearfishing #pesacas

Diving in Florida I have swum with hundreds (thous

So first day into our trip we were greeted with hu