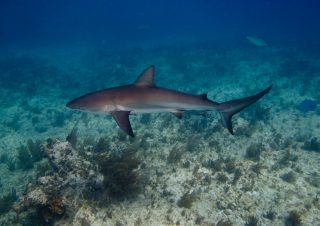 Well finally we got some good weather on the days which Catherine has off.  The first day Lou and Rafi came out with Catherine and I, the seas where calm but very dirty. When we first got out there there was maybe 15-20 feet of vis, which is bad for here. I often talk to people who dive other places and they think that is good vis, but we are kind of spoiled. The thing is the reef creates a ton of structure and although the fish concentrate in different areas, they don’t concentrate like they do in the gulf. They also don’t swim to you like the fish do in the northeast, at least most don’t.

We headed out and drove around in the green water for a little bit.  After a while we stopped burning gas and just jumped in on some shallow rocks, in around 20 feet of water. After a little while of swimming and seeing groupers which we are not allowed to take, we decided to just blast the hell out of the dozens of Spanish mackerel that were swimming around us.  It was actually a pretty awesome time. Shooting as fast as you can reload is a lot of fun. Sure the Spanish macs are usually only a couple pounds, and probably one of the least prestigious fish you can shoot but what other fish is available that you can just go nuts and shoot one after another of.  We shot and shot, missing , hitting, cutting up the real little ones to draw in the bigger ones. I saw one kingfish that came in on the commotion, but my gun wasn’t loaded so I got to watch him just swim away.  I shot a bonita which was a first for me.  Rafi got a photo, which hopefully he will send to me.

We moved around a bit but could not find fish, I shot a couple snapper and hog for Rafi.  Really amazing change since Christmas, when we were diving in 70 feet of vis shooting Blacks and big Yellowjacks.

Then yesterday Catherine and I went out. We hoped to dive some shallow inshore patches but the water looked like greenish milk. We drove and drove, the water looked terrible. Finally we found a section of clear water about a quarter mile long on the drop off. It was the strangest thing: it was clear like 30-40 feet of vis, but if you went a very short distance east or west it turned to milk water.  I jumped in with Catherine driving and was immediately surrounded by yellow jacks.  I lined up and shot two at the same time. Both jacks were around 15 pounds each and the second one came off. I don’t think the spear had enough force to shoot through two fish that size. The next pass the bigger jacks stayed away but I shot through two smaller jacks at the same time. The two I shot were maybe 6-7# each.  Soon there was I think a lemon shark following me, then it left. Then there were no fish anywhere for awhile, and then a pod of dolphins showed up. I had Cat give me the camera.  The porpoises did not come as close as the first pass but I got a couple photos. Then we moved because the fish seem to disappear when the porpoises are around.

Next I let Catherine drift with the camera while I ran the boat. She has been trying to fight the ocean and make it through the winter wearing only a 3mm wetsuit, and she has been failing miserably. She is usually shivering and in the boat before even half the day is done. Finally today she wore the 5mm  and she was able to stay in the water all day. She got photos of bar jacks , barracudas, other fish. Then after we figured the current was light so anchored very shallow and swam together. It was fun to snorkel in the shallows.  I shot another yellow jack and had a couple reef sharks come in and then back off. One of the reefies was small but the other was very big for a reef shark and he looked bigger then me. I figured being the only person with the a gun, we should probably stick closer to the boat in case they got very fired up. On the way to the boat I shot another bar jack and the sharks appeared again. I wasn’t sure if they were the same sharks or what. Once I got the fish under control and in the boat, I just said screw it and threw the bonita from the other day in.  It seemed like sharks came from all directions, I counted 5 in all. The really big one didn’t show but another bigger one did, and bunch of little ones. The big ones seem much more scared of people then the little ones. After a little bit Catherine had taken so many bursts of raw  images with the camera that the battery died, so we left.

Awesome pics Ben. That one of the reef shark is really good. You can tell Cat I finally got a new wetsuit, so no more getting caught on boat cleats with the old one. Went with a 3mm from Mako. Looks good and has a nice fit (a tad short in the legs, but oh well). Decided over the Imersion for ease of shipping, and the farmer john style should as some more warmth for me up here in Jax.